Written by Henry S. Kaiser, Jr.
lifetime family friend, who grew up in Nenana, is a teacher and a freelance writer.

This year, 1991, marks the 75th year that Coghill's store in Nenana has been serving it's customers in Nenana, the people in the towns and villages along the Tanana and Yukon Rivers, and the residents of the Interior Railbelt region. We are proud that the 75 year history of the Territory and the State of Alaska.

William A. Coghill, who founded this store in 1917, left England for Canada in 1906 where he was employed as a printer in Toronto, Vancouver, B.C., and Seattle. Like many of the adventurous young men of the early Twentieth Century, he was attracted to the challenge and opportunity that the rugged new farthest Northern Frontier offered—so he arrived at Valdez, Alaska, March of 1907.

Valdez was interesting but Fairbanks, 365 miles to the North, was the center of a large gold mining region and seemed to offer more opportunities. The fastest and most economical way to get to Fairbanks was accomplished by ten days of walking. A night or two Coghill stopped at a roadhouse but usually he and his friends camped along the snowy trail and cooked their own meals. Upon arriving in Fairbanks he and his two friends rented a cabin, took a bath and washed their clothes. 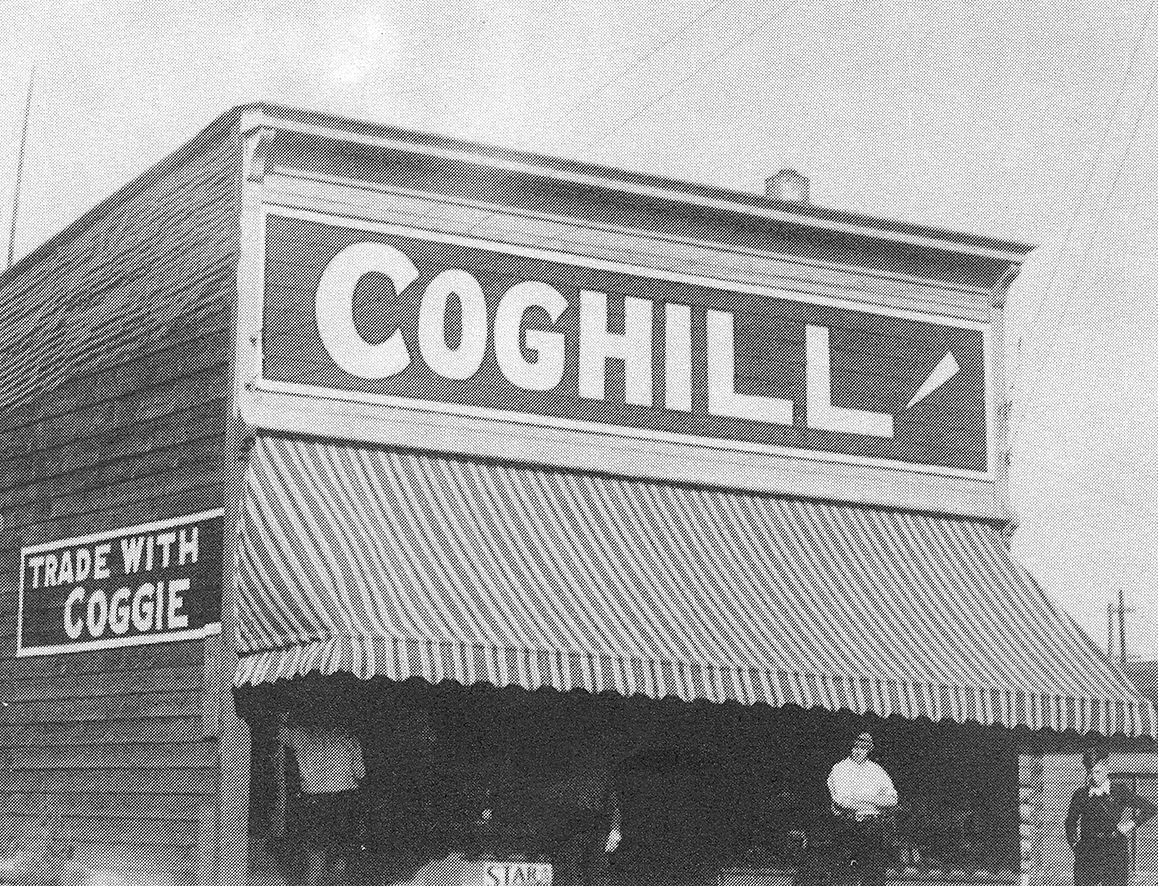 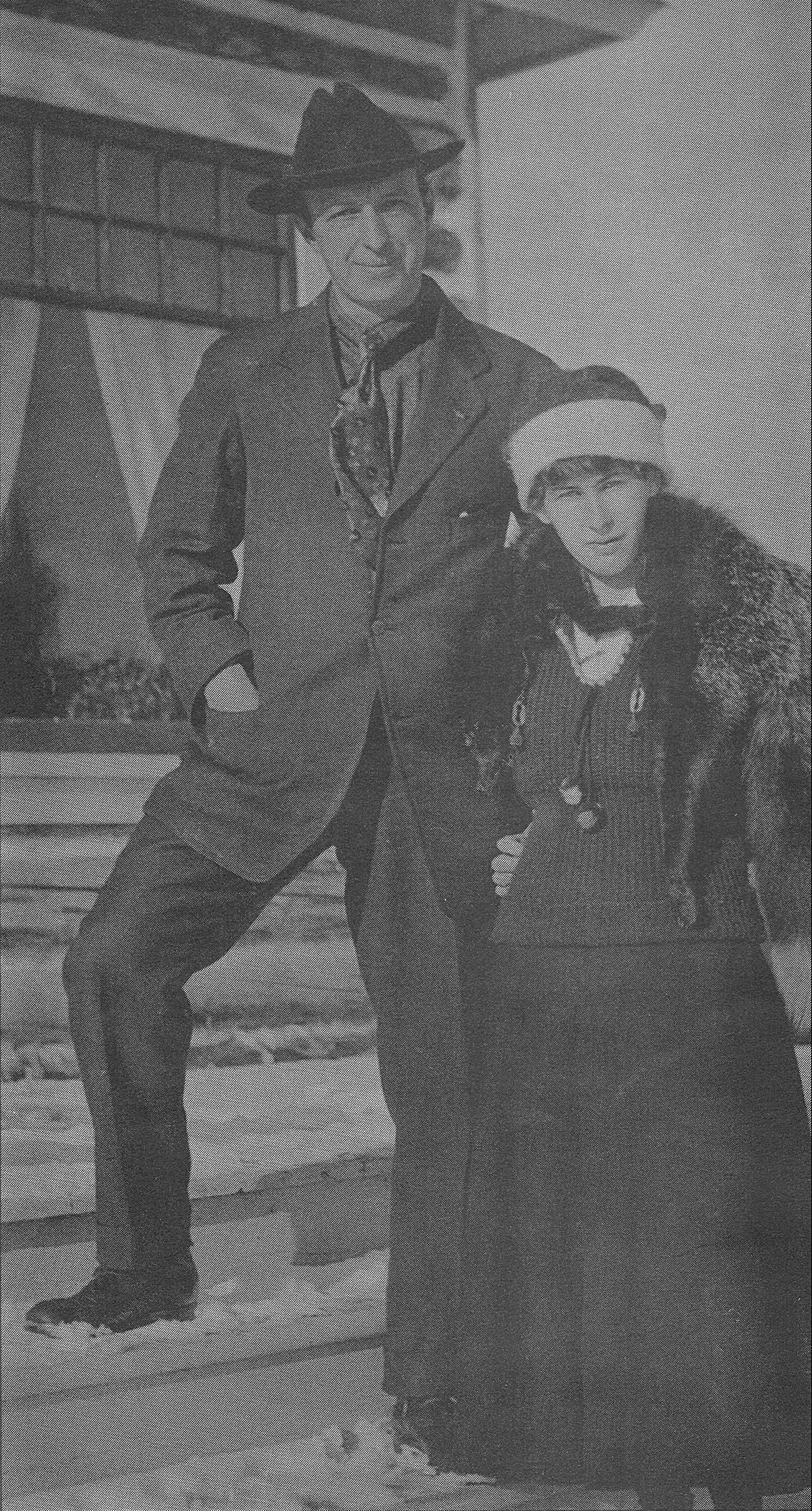 Coghill then tried mining on Gold Stream as a laborer running a wheel barrow or driving thaw points ten hours a day for five dollars.

But since newspaper printing was his trade he secured employment with the Times. Then he worked with W.F. Thompson's newspaper as a printer at Ridgetop and Chena Town. 1908 saw Coghill walking 12 miles a day delivering one hundred newspaper for $400 a month! The next step up was buying a horse and cart to deliver papers and then he began an express business by picking up groceries and other items in Fairbanks for miners in Chena and Ester. In a 1910 issue of the Fairbanks Daily Newsminer, editor W.F. "Wrong Font" Thompson reported. "Bill Coghill, circulator for the News Miner on Ester Creek is like the paper—he circulates always up to date, and has, at great trouble and expense to himself, invested in a gasoline buggy. Coghill's auto is a 10 horsepower Bluch runabout with a seating capacity of four, built in Detroit, Michigan. He will make two round trips daily to Ester."

In his column, "In our Town," February 7, 1923, editor Thompson noted, when recalling the early days of newspaper publishing in Fairbanks, "...14 years ago Bill Coghill was there every minute of the time in Those Days and did all the physical part of the publishing, so he is our best alibi man. Besides, today he is a prosperous merchant of Nenana, has a fine wife and good standing at the bank and goes to church every once in a while..."

Of course, the fall of 1916 Coghill had sold his Fairbanks holdings and moved to the booming town of Nenana as a partner with Paul Lescure in a combination hotel, restaurant and merchandise business and converted it into a store. Nenana was the busiest place in Alaska with the headquarters for the Alaska Engineering Commission which was building a railroad, docks and a very large bridge.

By 1919 Coghills mercantile business was quite successful but there was another Fortune on the other side of the world in England that 13 years earlier he has promised to return to—her name was Miss Winifred Fortune.

After a month's trip by railroad, dogteam, railroad and oceanliner Coghill arrived in England and married Miss Fortune. A return trip of two months saw them arrive in Nenana by river steamboat from Dawson, Y.T. on September 29, 1919.

Their first home was a small cold log cabin, so they moved into the apartment above the store. Winifred helped Bill with the store. In those days there was considerable credit trade by furnishing fur trappers a "grubsteak" for the winter which consisted of staple groceries, clothing, traps, guns and ammunition. When the trappers returned in the spring the furs were graded, and cash was immediately paid for the amount of the difference from the credit owed.

The first Coghill baby was born in 1920 during a flu epidemic with Bill sick, the store was closed. The girl died of pneumonia the next year, almost the same time the store had a fire followed by a flood. Winifred was advised by her doctor to return home to England for a visit. Coghill needed to stay to run the store so Bill, Jr. was born in England, July of 1923. 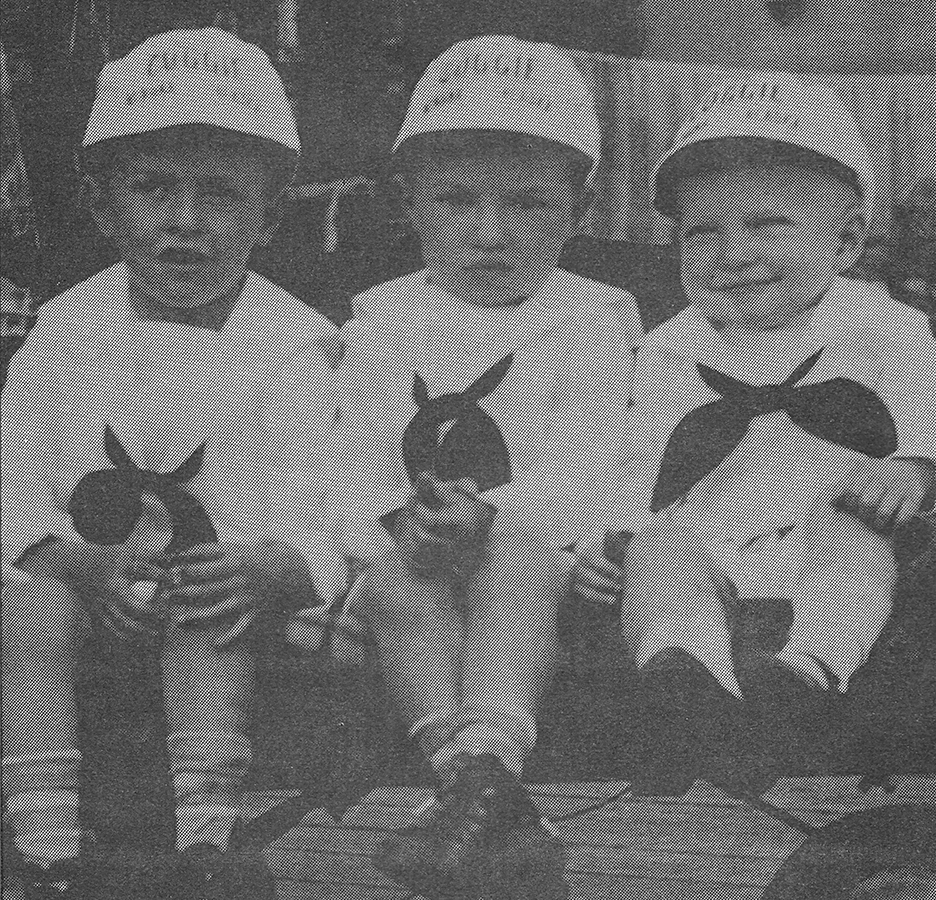 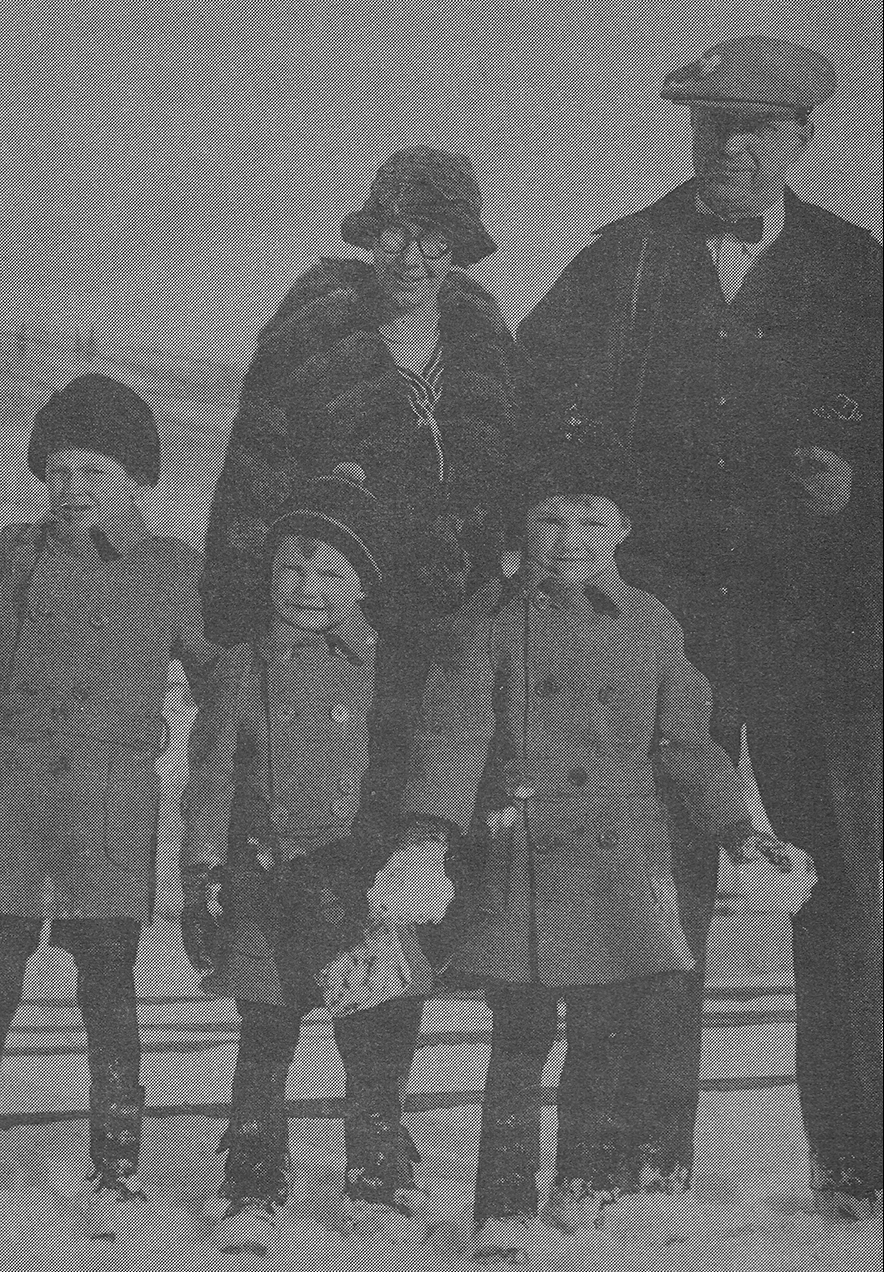 The huge railroad bridge at Nenana was finished during Winifred's absence. Coghill was abroad the first passenger train to travel over the bridge and attended the ceremony when the President of the United States, Warren G. Harding drove a Golden Spike signifying the completion of the Alaska Railroad.

With the construction phase of the Railroad over, Nenana experienced a drastic decline in population and became quite small. Now freight arrived by railroad and was transferred to steamboats which could transport it on the 4,000 miles of Alaska's interior navigable rivers, so commerce continued.

Nenana's most disastrous fire which totally destroyed 14 buildings occurred the fall of 1936. Coghill's lost their store, a warehouse and all their personal belongings including valuable family heirlooms that Winifred had brought from her mother's home in England.

Like other business owners along that block, early that evening the Coghill family, which now had three sons, stood in the street and the hard reality of the situation hit—they now realized that 20 years of hard work had just gone up in smoke and that all they had left were the clothes on their backs.

The family checked into a hotel for the night and there were tentative plans for the next few days that it was time to move back to Fairbanks. Bill, Sr. has some job promises and offers to buy good business property there. 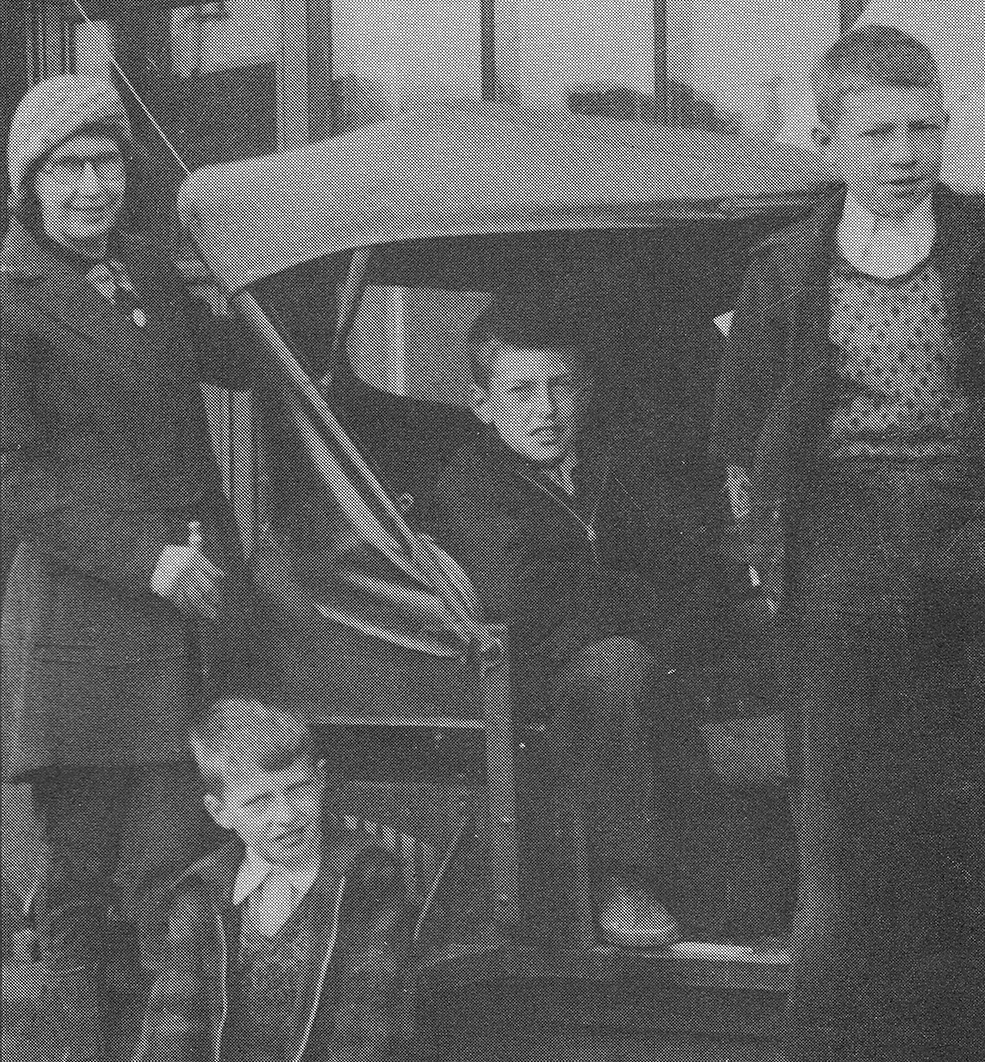 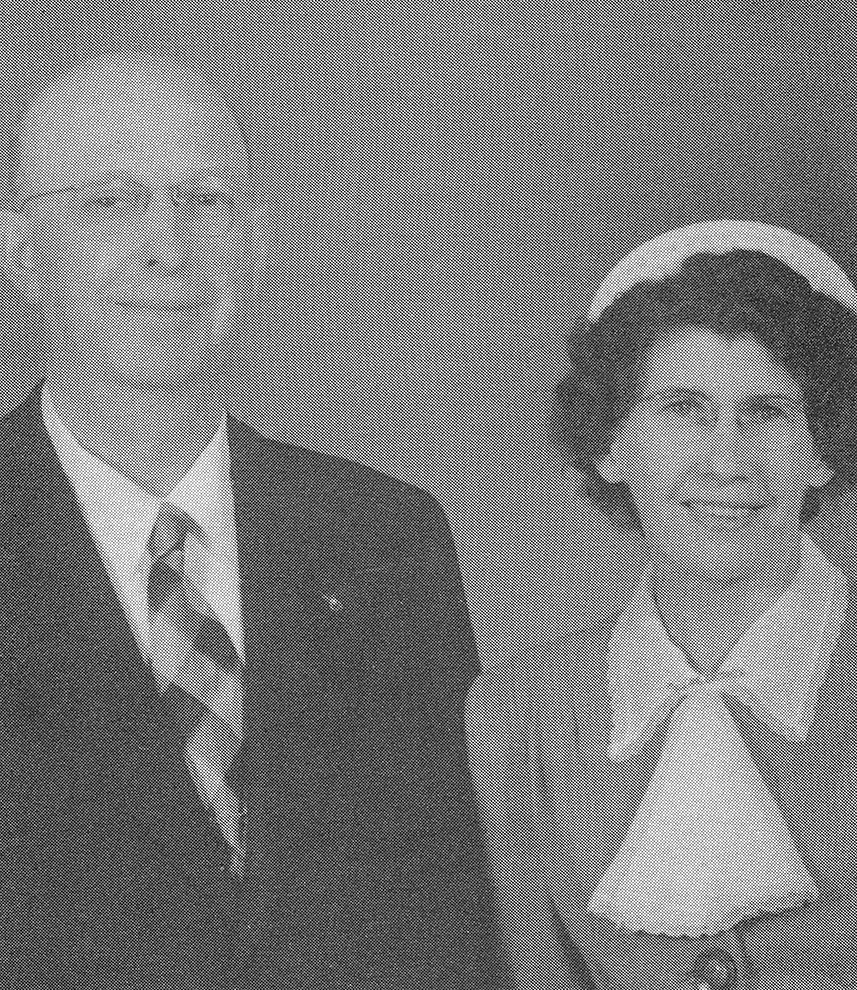 But the happenstance of having a large carload of groceries and supplies enroute by rail delayed the Fairbanks plans. The Coghills, all five of them, moved their store into a small cafe, started over again and Fairbanks was soon forgotten.

During the 1930s, the Coghill boys, Bill, Bob, and Jack began learning the mercantile business from the ground up. They hauled freight from the railroad station to their warehouse, stocked shelves, learned to grade furs, waited on customers and delivered groceries to the homes of Nenana residents.

Back in the 1930s and 1940s almost all Nenana people were "walkins." Nenana had about a half-dozen motor vehicles, two were owned by Coghill. Delivery orders were normal because grocery packaging was not as refined 50 years ago. Most orders were written on a credit slip and listed, "100#s flour, 25#s cornmeal, 1 case canned milk, 50#s sugar, 6 cans of peaches, 10#s of oatmeal, 4-3# cans coffee..." After school one or two of the boys made the home deliveries and if the pickup truck was not running, they used their Flyer sleds or a Yukon Sled.

The business climate began to improve during the early 1940s with the FAA airport and construction of airports up and down the Tanana and Yukon Rivers. Along with this came World War II and Bob and Jack served in the Army and Bill was a cadet at the U.S. Military Academy at West Point.

Bill, Sr. died in 1947 and Winifred offered to sell the business so that the boys could finish college. The boys said, "No Mom, we four will form a partnership, we'll stick to our roots, with our friends and neighbors—the people of Nenana and those living in the river and rail communities of Alaska's Interior regions." Bob became the store manager, with Mother and Jack assisting while Bill continued his military career.

Late 1959, after 42 years in business in Nenana, Coghill's store became the only store in town when they purchased the Northern Commerical Co. Branch located across the street. When the boys were growing up during the 1930s and 40s, Nenana had five stores! Our 50th Anniversary in 1967 saw Nenana experience its most disastrous flood and the store was severely damaged and we lost all of our stock. 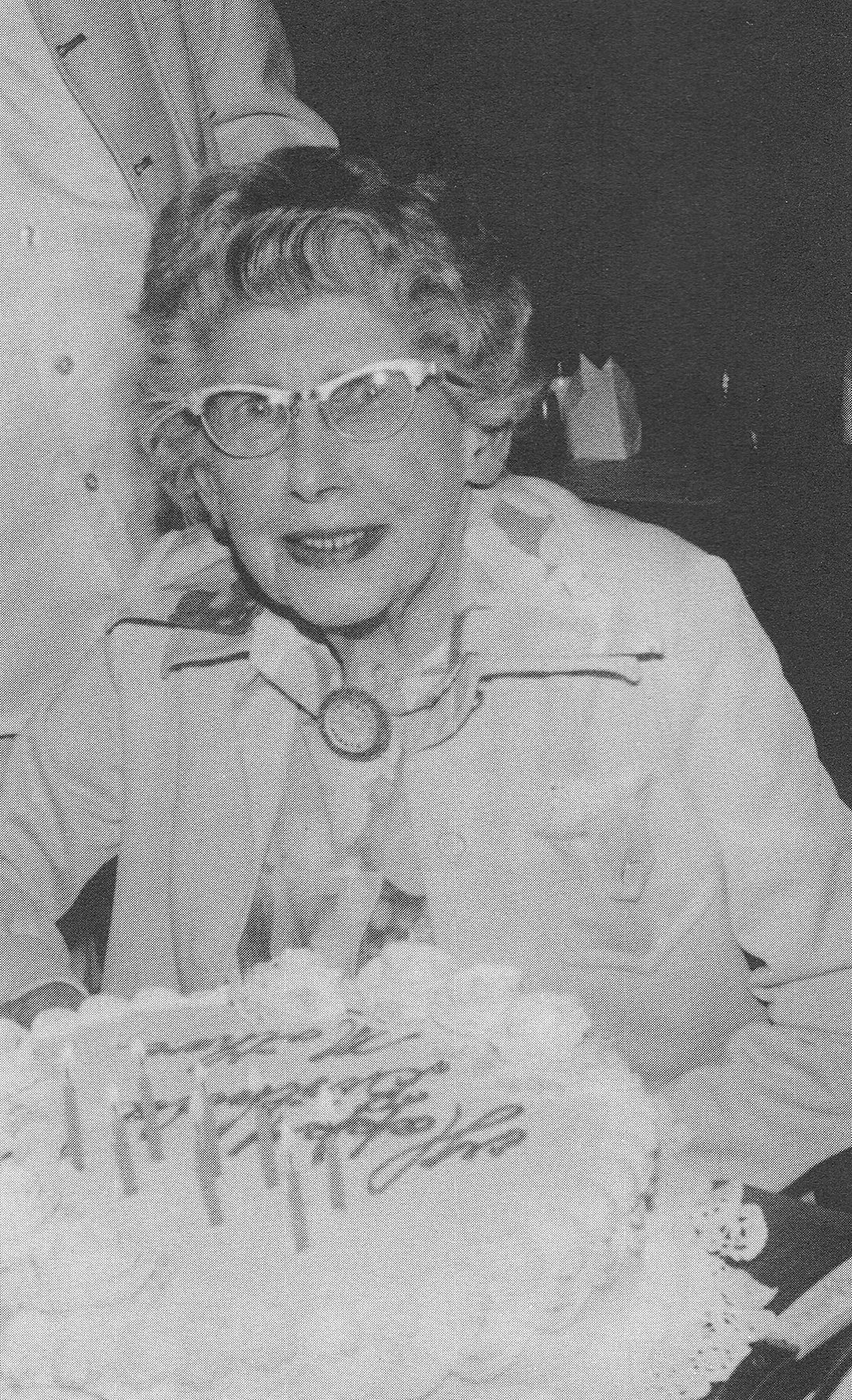 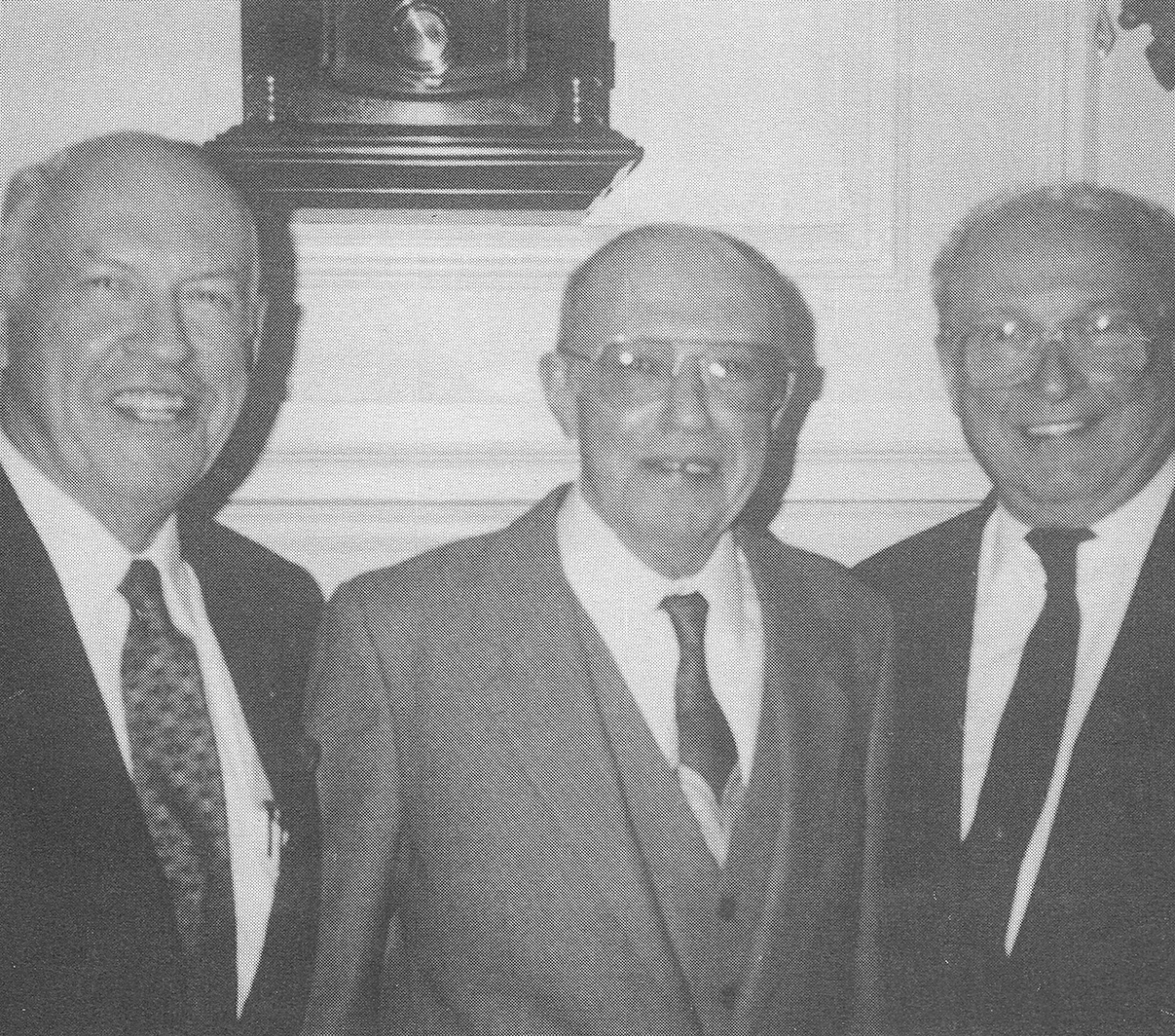 Looking back at 75 years in Nenana, we often think of Jim Duke who about 1902 built Nenana's first roadhouse and trading post. He believed in what the Native name Nenana actually means, "a good place to camp between the rivers."

These past 75 years have proven that working with the residents of Nenana in their civic and fraternal organizations dedicated to promote and improve Nenana has been very rewarding. Winifred played the organ at St. Mark's Episcopal Church for more than 50 years, Bob and Jack have served many terms on the city council, school board, the Ice Classic Committee and have bound the book of guesses each year for the Nenana Ice Pool, taking over from Bill, Sr. and Winifred.

Jack who is now the state's Lt. Governor, served more than 20 years as Nenana's mayor and has been involved in Alaskan politics since 1953 when he first served in the Territorial House of Representatives. Bill now retired from the U.S. Army in President of the Alaska Association for Historic Preservation and is active in other statewide historic projects.

So, "...who has been minding the store.?" Of course it has been Bob, who on a day to day basis for forty four years has kept our customers happy with his concern for their needs and who has continually made improvements to better serve them.

Yes, Jim Duke and the Natives were right, Nenana is "a good place to camp." With the past history in mind, the next 75 years in the future cannot be but another grand adventure! In memory of William A. Coghill, 1884–1947 and Winifred Fortune Coghill, 1896–1981. Thank you, thank you one and all.